A Pictorial review of every burst Joe B. has ever played on stage...

I thought this one was originally posted here awhile back but couldn't find it... Wow. Bernie is so tiny. Did he dance around a miniature Stonehenge?

Shitty iPhone pic of Batman, I believe.
Click to expand...

How does this even work? Do people offer to bring bursts for him to play?

Joseph Palmer said:
How does this even work? Do people offer to bring bursts for him to play?
Click to expand...

Yes, many of us have done that.
Y

Joseph Palmer said:
How does this even work? Do people offer to bring bursts for him to play?
Click to expand...

They do and I think it's f@#king awesome. I can't explain why, I just think it is.:dude:

Yes, that's just awesome. Totally awesome. Does he have specific requirements about it being set up ahead of time for his favorite strings, or does he just grab anything from .009 to .011 and let the guitar tell him what to play?
M

A veritable cornucopia of beautiful bursts!

Thanks for keeping the flame alive Joe!!

OK, so what is the correct term for a "bunch" of Busts ??

au_rick said:
OK, so what is the correct term for a "bunch" of Busts ??
Click to expand...

Bill
How cool is that! Nice pic too.

Mike or Joe
What was the first burst that went onstage with the show and when?

Joseph Palmer said:
Yes, that's just awesome. Totally awesome. Does he have specific requirements about it being set up ahead of time for his favorite strings, or does he just grab anything from .009 to .011 and let the guitar tell him what to play?
Click to expand...

I can only speak for my own experience. I get there for sound check and I know he wants 11s, so Mike restrings it [I use 10s].

Although I trust Mike to do the restring right, I added security when he had his hands on Donna. :ganz 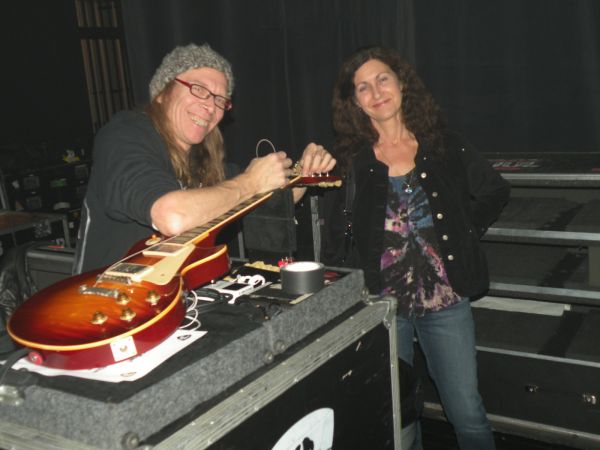 CD, do you you recall his impressions on Carmelita? Something unique about that guitar I really liked and couldn't put my finger on it, even so... with it sitting next to the previous owner's dark back GT it was outclassed as an instrument... IMO... Don't get me wrong, I thought it was an exceptional guitar in its rightfully elevated class but to me, his '58 (?) GT was as good a guitar I've ever played with the LP namesake, regardless of finish. I've never played Sandy plugged in but also wondered what his thoughts were as well. Still my personal fave of all of them. I'd one day love to get straight up impressions about so many of these we know as well as those few I've had a chance to see or play. I'm not sure I've ever played one of your bursts but I can think of a few guitars you own that may be "best of the best" in respective classes compared to dozens and dozens that I've played over the years. Now that Gladys is no longer Ganz's I'll have to say it never looked anything remotely like an "uber" to me. The flame doesn't even call to mind anything "vintage" at all to me, very repetitive pattern and uninteresting to my eye FWIW. But, heard lots of hype about the legend of its sound, just wondered if it held up in the mind and hands of a player who has the chops, ear, and exposure to enough 58, 59, and 60, sunburst Les Pauls to place it in that group of amazing bursts he's had the privilege to put through the paces on a live gig.. It would be nice to get a truly candid, no politics, honest, and straightforward rundown on these guitars we all know so well without the hype I think it's possible we've all been guilty of at times when playing guitars of our friends. I know I've danced around what I REALLY thought about a guitar more than once for diplomacy, just plain niceties, and social etiquette because so much seems to be iinvested emotionally with some of these guitars....which is also an intangible I can appreciate.
Last edited: Dec 22, 2014

The night I shot Joe with Carmelita, he had just gotten it, so he didn't give me an in depth tone report. I know he's been playing it A LOT since he got it, and since he has a lot of them to choose from, and some very good sounding ones I might add, my guess is that he really likes it.
I may be wrong, but I think his all time favorite one tone wise, is Tom's Sandy.
He'll show up here in a day or two,. Maybe then, he can rate some of them for us.:dude:
You must log in or register to reply here.
Share:
Facebook Twitter Reddit Pinterest Tumblr WhatsApp Email Share Link
Top