(I will be there on Saturday, hangig around at Tom's booth with my 1965 Firebird and my 1952 Supro Spectator Lap Steel.)

See you there, Fred! :dude:

I will be there on saturday, too.

A Fred with a Firebird will be easy to discover

Let's hear from you guys...
I wanted to come but at the last moment had to cancel the trip.
Next year I hope to be with you.

From Tom´s table. For me, both have the perfect color :salude :

Check out how clean that 52 Unbound is. Bet those knobs never seen the light of day. Crystal clear.

My friend Hans-Werner Wirth has also made some great pics. Here are a few of them.

It was a pleasure hanging around at Tom's booth.
Well, Tom does not like Firebirds. Maybe he likes mine because it is strung lefthanded and unplayable for him anyway...

Hans-Werner liked the checking on the Firebird...

A great panoramic picture of the finest guitars at the show...

You can see more pics here:


Hans-Werner is a bass player, be aware to see some basses...

Here are some other pics of the finest guitars of the show: 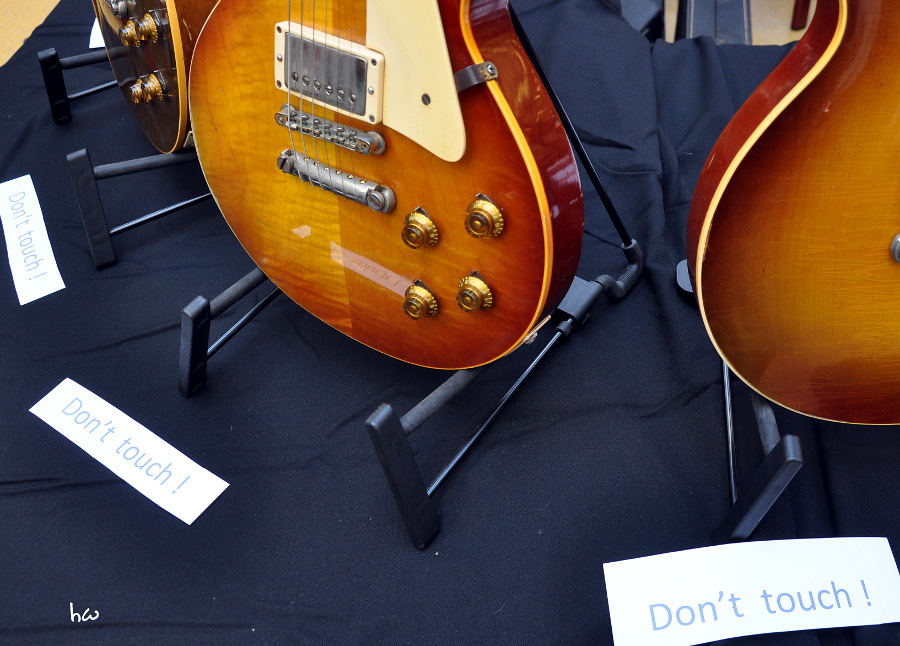 MapleFlame said:
Check out how clean that 52 Unbound is. Bet those knobs never seen the light of day. Crystal clear.
Click to expand...

I would love to have an unbound 52 one day!

Well, it wasn't really my booth, but there were four great Les Pauls there. And that 52 has seen the light of day, plus gigs and recording also [I think]. It gets played ... just not as much as the 58. And I am extremely fortunate to get to play the 57 GT! I even got to use it when I was jamming with Gregor Hilden! :dude:

Fred, I loved the Firebird! I just could not handle the left hand stringing.
And, did you notice that you and I [plus Ludo] were featured in a photo for this year's show poster? :ganz

It was a fun show as always. This is the only show I go to besides the Dallas and Arlington shows, and I really have a ball with great friends, plus new friends!
Jörn does a fantastic job of making a great show!

refined on Sunday moring my article on how to solve finally
the bias thermal drift problem in Marshall TSL122 (JCM 2000) amplifiers,

Jeff played a medley of Les Paul tunes. He told the audience about Les and that he played his tunes on the more than 50 years old guitar that Les Paul invented. Great old wood, great sound, great artist, great gesture.

Thanks y'all! Beck on a Lester! Sweet.

Germany - my favorite country to visit! The people and culture are just FANTASTIC! In a word - "civility"...eace2

Joe Ganzler said:
Germany - my favorite country to visit! The people and culture are just FANTASTIC! In a word - "civility"...eace2
Click to expand...

Thats funny. I know a lot of people(myself included) who love to travel to sunny so-cal, because we find the people and area FANTASTIC!


Where there any vintage les pauls for sale in oldenburg?:hmm

Thanks to all of you guys Fred,Stephen and Tom for bringing the pics from the show.
So...what is the general impression? did many guitars exchange hands?
How is the German market doing about old American guitars? I understand that none of the Bursts were for sale, same with the 2 GT's?
Or maybe I am wrong???:applaude :applaude :applaude eace2

More pics will be great.:bat

Thanks Stephan...
MORE pls....good to see this prices.It gives a idea.:hmm

Im really disappointed i couldn't make it this year. Will put it up as a mayor 'dad day' next year!