What to expect from a light Les Paul?

With a few exceptions, it really depends on your ears. A heavy guitar will generally result in increased sustain, but that doesn't always translate into preferred tone. If you're using an ass-load of multi-stage preamp gain, you're hearing more amp than guitar. At that point, it doesn't matter much what you plug into it; only that the pickups don't squeal. With a lighter guitar, you're going to achieve increased resonance; which is something "metal" players generally like to avoid, even if they don't realize it. Increased resonance = decreased sustain. Classic rock players (who use lighter guitars) generally rely on amplifier feedback for sustain. Allen Collins was notorious for this, as were many of that era.

Most of us classic rock players reference our sound by playing "X" guitar against a Marshall Super Lead and/or VOX AC circuit. No preamp distortion, other than a boost pedal. For most of us, that is de facto rock tone. 50's era Gibson LP guitars (along with select Historic models) are lighter, because the mahogany was/is sourced from higher up. Stump level wood is more compact, which results in increased mass/weight. I prefer mahogany body guitars that weight between 8 and 9 lbs, but there are occasions where I want something with more natural sustain... For that, I keep an 11 lb LP Custom handy.
Last edited: Jun 22, 2021

mjross said:
Yes sir! I’d never heard of Amalfitano Fullbucker pickups until I got this guitar. They have a very nice rounded clear tone. These guitars fly under the radar but are as good or better than many of the high end “usual suspects”!

Got a response directly from Roger Giffin himself just a few minutes ago. He informed me that the pickup surrounds were on the way. I requested which payment method he’d prefer and cost. He told me that they were on the way at no charge. Who does that? Yeah, service after the sale. Can’t beat that!
Click to expand...

That is just awesome and shows the type of Gentleman Roger Giffin is , a man of principles and integrity and guitar building skills of the highest level !

renderit said:
See ya Al. And call ya...

And as a fact, several guitar shop owners have played that 62 "SUB SIX" and proclaimed it to be the "best sounding p90" they ever heard!

As is this with 'the log' for a neck. 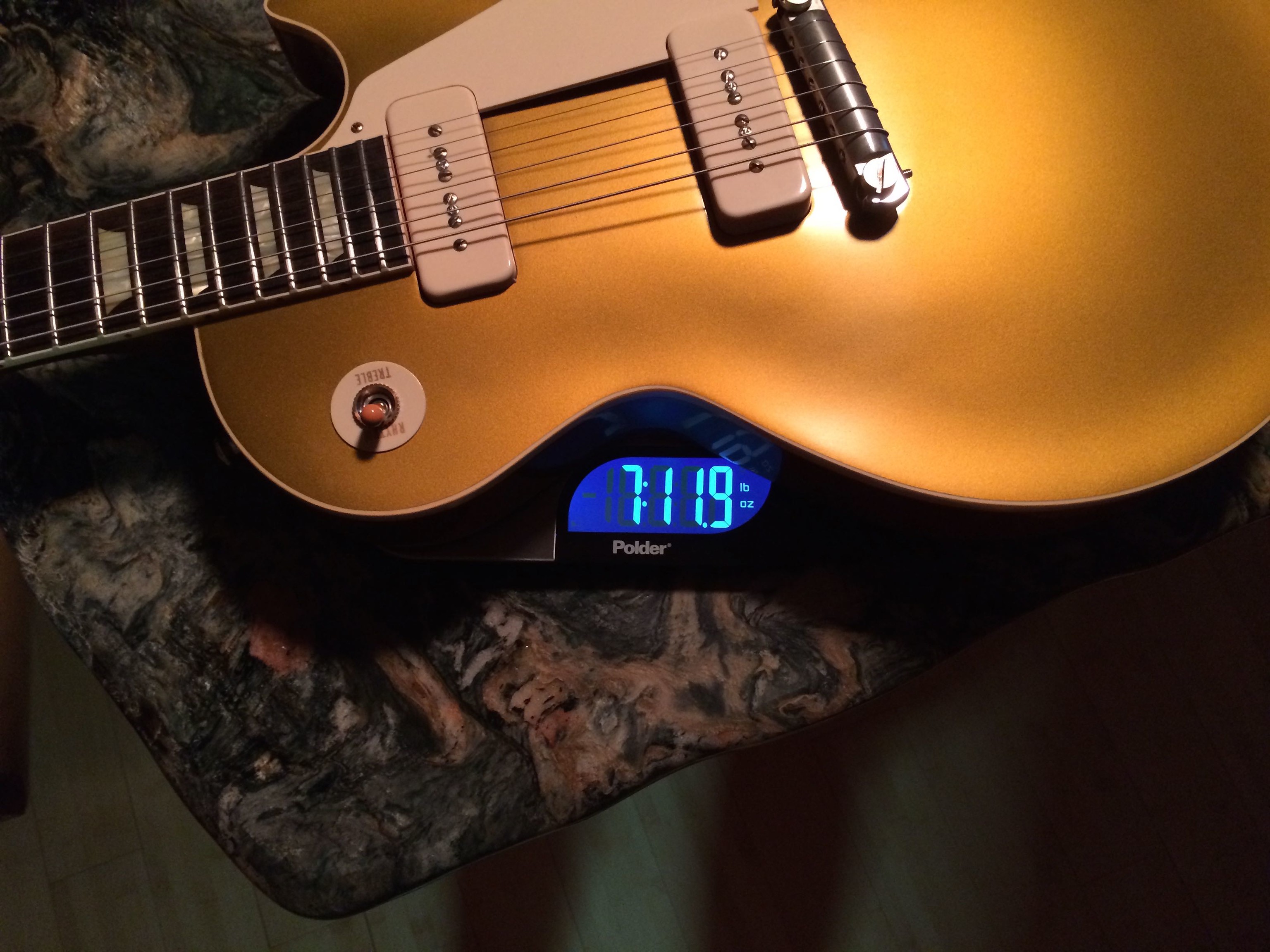 None of them was bought BECAUSE of the weight.

The R4 was the only one I could find at the time and it sounds fantastic, so I disagree.

I would also say I have not seen a MM EVER over 8# and only a few Jr's. that were.

Now maybe a sub 8# does not fit your style.

Seems to fit mine fine.

Oh, my last one sub 8. The rest are over. This one sounds sterling as well. 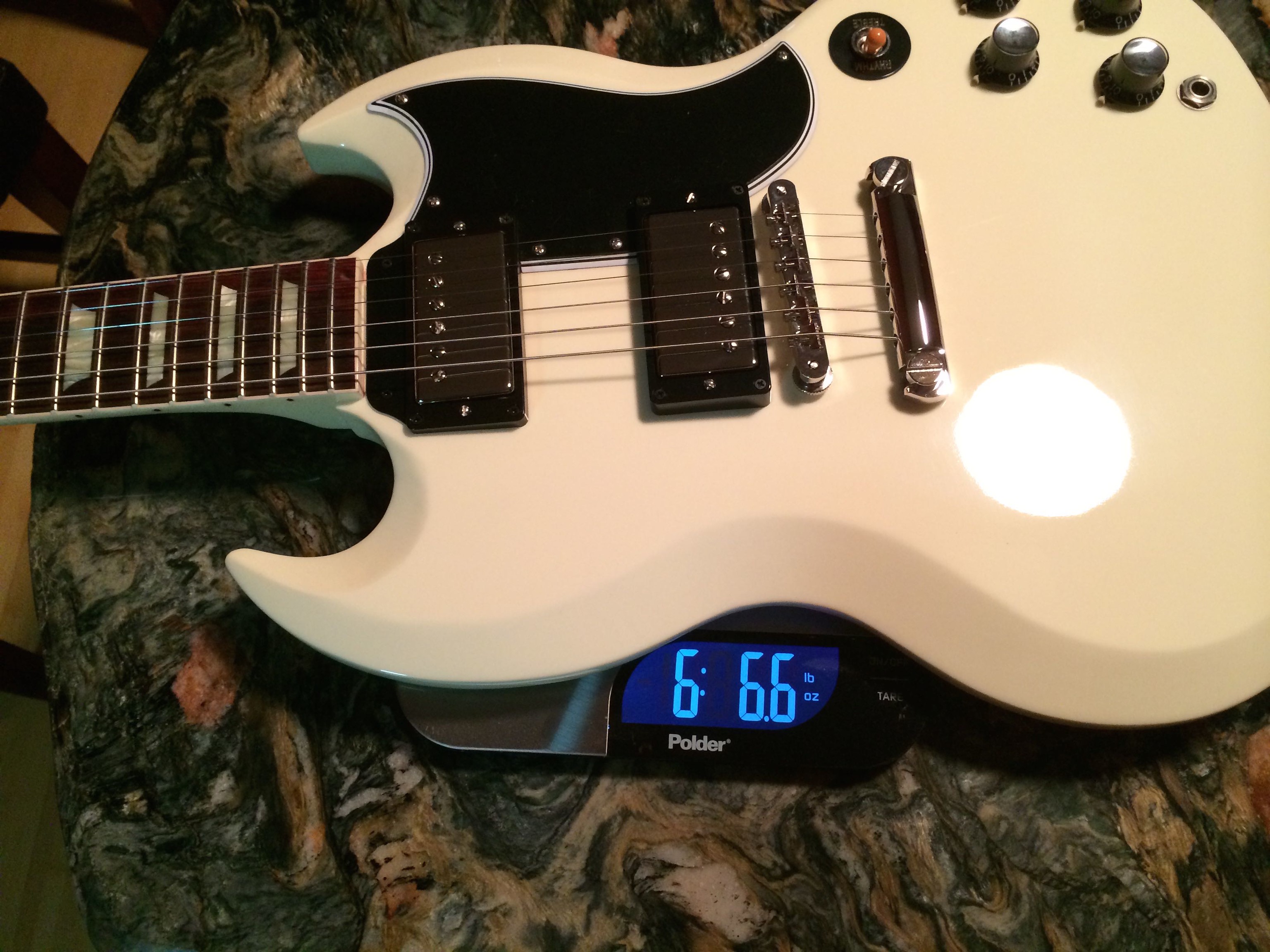 I'm sorry, Ren all you have is a bunch of lightweights. You claim they were not bought because of weight, yet there they are. I don't know how to be clearer, I have yet to find a lightweight solidbody Les Paul or any other model that have great tone. They may sound fine all alone but when compared with same models in groups they fall short. I'm sure some maybe do, I've never found one and if asked I'd never recommend anyone search out the lightest in a bunch expecting the best tone. Quite the opposite in my experience. I do not subscribe to the notion of perfect weight for tone but can be fairly confident that the outer fringe of featherweights and boat anchors as poor choices on average. Freaks excepted.
You must log in or register to reply here.
Share:
Facebook Twitter Reddit Pinterest Tumblr WhatsApp Email Share Link
Top