Thanks Jay! Much obliged.

I see some interesting and curious things on that chart. First, I see that whoever added up the totals in Adrian Ingram's book (where I got my info on another forum) had some trouble with math. They had the totals for 1964, 1966 and 1970 wrong (off by 10, 10 and 8 respectively in those three years). I had the total number of Sheratons from '59 to '70 at 672, but according to your chart the number comes out to an even 700.

Your chart shows three other designations, the E-211TN; the E-212TV Ch; and the E-212T Ch. I've never heard of the "Ch". Did they give the cherry finish its own model designation in 1967? That would seem odd, since they had been offering cherry starting in 1962. Maybe the "Ch" stands for something else? Anyway, it's great to see the numerical breakdown. I kind of wish that they'd broken down the totals for cherry and sunburst for the "T" and "TV" models, though.

Why so many of essentially the same thing? This isn't a bad thing, I'm just wondering.
Click to expand...

It's funny how these guitars just came into my life without any grand design over the past couple years. Then again, collectors collect...

Two first racks, on the left. You might recognize the second from left, I think it passed through your hands a couple years ago.
M

Nice! I thought that guitar looked familiar. Glad it found a great home. It's an excellent instrument. I miss it! I'd be curious to know info on your other first rack. Serial number, FON, etc., if you're willing to share. You can always PM me if you'd prefer. I'm a bit of a geek where first rack 345s are concerned. Fabulous collection!

Heaven has a Varitone?

Never thought about it, but probably so!

Texsunburst59 said:
Those are some beauties Monroe. The '61 125 is in incredible shape,and is just beautiful. Very Nice!!!

Thank you... I bought that '61 in late '68 or very early '69 (before Feb, cause that's when it got the Bigsby)
The shop wanted 125, and gave him 100 and a really crappy Teisco and talked him out of a chipboard case.
That was a lot of money back then, especially for a 9 year old kid. My mom freaked out, but my dad just grinned.
My teacher at the time had a Bigsby on his hollow body so I used birthday money and got a Bigsby in Feb of '69.
The red on the top has faded a lot since I got it.
I have misplaced the rosewood bridge somewhere along the way, but it benefitted from the TOM a lot.
The pickups both measure in the low 9s and are really too close to the strings.
George Thorogood would love it.
Last edited: Mar 17, 2016
F

So cool, and of course there's nothing wrong with more than one of the same thing.......:salude

F-Hole said:
So cool, and of course there's nothing wrong with more than one of the same thing.......:salude That WAS a nice collection of ES's for sure LS. I bet there's a little regret in letting them go,but that's what bills and GAS does.

lonesomesheik, that was one gorgeous Crest! Your post has inspired me to post a couple of my departed old friends... Damn... you keep me awake at night when you post that one. I had a '64 that was very special, though not in the condition yours is in (I bought it from Robben Ford in the mid-80's, after he'd gigged it for years).

You sure had very nice friends indeed!:salude 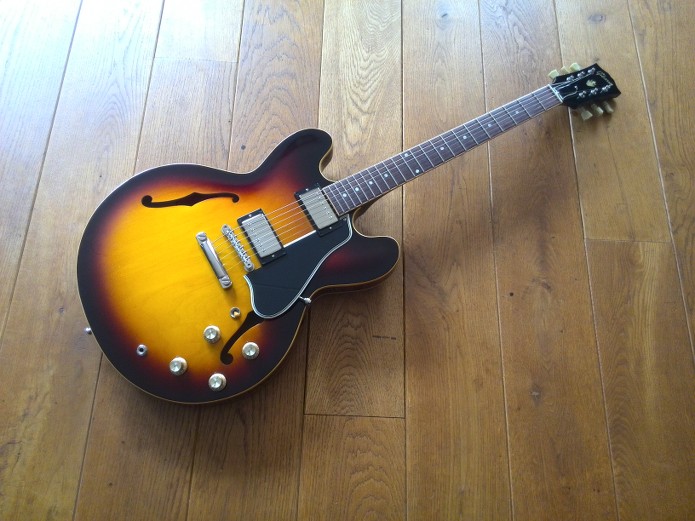 F-Hole said:
So cool, and of course there's nothing wrong with more than one of the same thing.......

F-Hole, if we were playing poker, you'd win :dude:

Sweet, sweet guitars! I love the floor, too! eace2