I Love ES's as much as Les Pauls anyone else?Post your ES's guys if you would like to.Here are some of mine.Thanks Mike B.
1959-ES-335

Loving the colour on that 345 mbowen!

Nobody shoots a sunburst like Gibson did back in the day. Do they just look that good because they have aged/faded a bit, or were they just done that beautifully? None of them are museum pieces, but damn they sound good.
'67 refin 330 with modern parts, '65 345 that has some weird mojo going on after the varitonectomy and renecked late 60's 335 with PAT number pups.

Here are mine, with a few ring-ins.

Missing from the group shot:

ultra said:
Here are mine, with a few ring-ins.

Gorgeous! Tell us more about the 355! 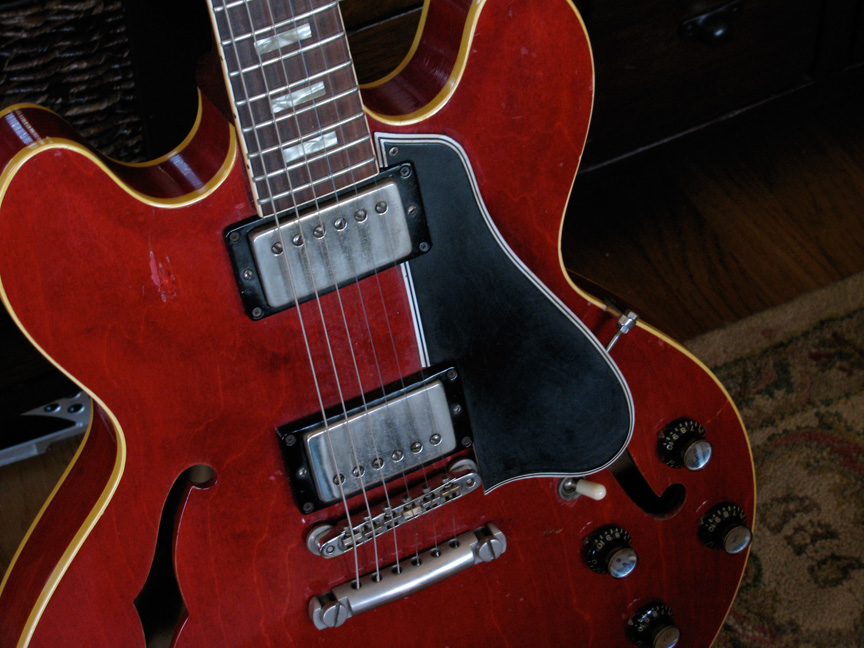 Here's my early 1959 ES345 with black Varitone ring - and Varitone fully intact. The original tuners have been changed to Schallers, the orange label is long gone, and the ears are positively bulbous! Note: (One of) the correct way(s) to deal with the stereo feature of the 345 and lose no tone whatsoever: The cable I use is a stereo to TWO monos. I like the OOP so I run them into the same channel of the Fender. I have further modified the amps that I own that have a single input to a stereo input that behaves and functions identically to the two inputs on one channel of a Fender. Again, there is absolutely no loss of tone and I can switch from LP to 345 without any fuss what so ever. The amp modification cost $25.

(I loves me some Varitone! I use many of the settings; the 345 is a funk machine!)

Thanks guys there are some awesome looking ES's in this thread already.Come on you guys who love ES's and haven't posted yet --get in here with your ES's,Please ,Mike B.

And the rest of the gang: