I did a song named "Look Ahead" usign it: (second song down from the top)
http://www.guitaristworks.com/artists/bands/17/

One of my mentor's plays one,a '96 in sunburst.Kick ass guitar.I've played it quite a bit through a Mesa Boogie .50 caliber +.It does the jazz thing well,it does the rock thing well.A true "fusion" guitar.

His has the "finger" tailpeice.Once you get it figured out,it's a neat useful feature,otherwise it can be a pain.I'd try to get a stop tail myself.

It's basicaly a slightly thicker,single cutaway 335.Or,you could think of it as a slightly thinner,semi-solid version of an ES-175.

I need to pick one up while they're still reasonably priced.They're probably the best "sleeper" Gibson out there right now.They're great stock,but I'd probably toss the 490/498 pup set,and put in a Duncan 59/JB set.

I have a black Howard Roberts Fusion -97; with the finger tail piece and the strange positions of the volume knobs. It originally had a 490 R in neck and a 490 T at bridge. The 490 R in the neck sounds just beatiful in this guitar, but the bridge pickup was too bright and thin, so I changed it to a Dimarzio Air Norton, which has a sligthly fatter sound. The sound in my Howard is extraordinary good. The neck pickup, with no overdrive pedal, is dark and woody - like a ES 175. With some overdrive and a touch of chorus the sustain is hilarious: I get a perfectly controlled feedback when I bend the strings and turn to the amp. Both pickups gives a smooth ES 335-sound, which also sustain til the cows come home. BTW: recently I saw a picture of Peter Green at a concert in New York some years ago. And what did he play? A black Howard Roberts Fusion with the gold finger tail piece. Tasty...

Peter played that HR Fusion for a long time,along with a Strat.Probably still does.He said in a couple interviews that it was one of the best guitars he'd ever played.

I had a 1980 in Fireburst. Ya don't see too many of those, let alone in THAT color. Mine was a great Norlin-era Gibson.

Wheelchairbandit,
What's the right way to adjust the "fingerstyle"tailpiece?
Mine is a '91 red HRF and it sounds ,particularly in the neck position ,very good.
The only bad thing is that the quality control on this guitar was not good, but overall I'm very happy with the guitar.

4feather,
Those fingers adjust the tension of the strings.Hence,you can really screw things up with it.

Unless you REALLY know how to properly set up a guitar,I'd take it to a pro,tell them what kind of a setup you want and whether you want the strings tight,slinky or whatever,and let them deal with it.And make sure it's a REAL pro and not your average guitar shop dufus,because they can manage to screw it up worse than you could have.

The finger tailpiece is a Oettenger tailpiece, which is sometimes seen on old banjos (recently I saw it on a Custom Shop Johnny Smith). It can be used to adjust the tension of the individual string: in theory a higher tension will give more sustain. As we know: the ordinary "passive" trapeze tailpiece on jazz guitars gives less tension and less sustain compared to a stop tailpiece, which press down the strings much harder to the body. The thinner strings would probably sustain better being somewhat harder pressed down, and the thicker strings could be adjusted with slightly less press? Perhaps an issue for a real jazz guitarist, thick flatwounds and soft press will give a fast decaying ES 175-tone - lighter strings and harder press will give an ES 335-sound. But I don´t care so much about that. Sustain is good: I have all the six fingers pressed down as much as possible. Since the fingers for the lighter strings on the Oettenger tailpiece are longer than for the thicker strings, there will automatically be different press (that´s how I see it, anyway). And my Howard sustain for days.
Last edited: Apr 17, 2006
D

I have a '98 Brown Sunburst model. Great guitar, the bridge pup is a little lacking but I don't plan on swapping it out anytime soon.
G

Whats a good price for a Ebony/Gold 96? I played it a couple weeks ago and its been hanging at the local shop for awhile. Price tag on it is $1700.00 and its in almost MINT cond including the Gold Hardware.
G

Didn't realize they came with the 490/498. Thats the first time I played them that they DIDN't sound like them. Probly arn't. probly a pup change done, but both pups were very clear. Definatly didn't sound like a 498 in the bridge?

I checked the prices on Ebay before I bought mine a year ago. They went for $ 1000-1200 then. Perhaps it´s somewhat higher now, but they are, as Wheelchairbandit say, probably the best "sleeper Gibson" out there right now. They come with different pickups: I´ve seen 490 R, 490 T, 498, and also P90s. So if it didn´t sound like a 498 in the bridge, it perhaps was a 490 T. The 490 T, with its modern high mid spike, sounds probably great in a darker Les Paul. IMHO, in a semi-hollow Howard Roberts it instead sounds thin and weak.

They are great great guitars.

Here's another clip with a jazzy tone.

GW JAM #7 near the bottom of the page.

The first guitar; it´s a Strat?

Here's the one I sold last summer (one of my main guitars, btw): 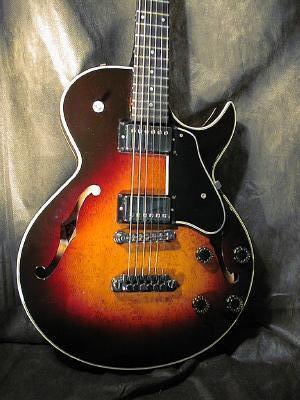