I am a self proclaimed amp snob and bored to tears with the latest greatest amp claims...and today it seems that's not the smartest place to be if you want to find "something new" or special.. ..I've owned just about every vintage amp known to man to be even half decent... most boutique brands and several models of each at that...and so on... Played most modern production amps and owned quite a few of those ,too.... ...played Dumbles?? check...Trainwrecks?? check.. and on top of that, I've probably played more one nighters than 99% of all guitar players alive (well over 6000 in past 40 years)..so my ears are pretty well educated in what are the practical and desirable traits of what constitutes a great amp that will handle a wide variety of musical duties in outstanding fashion. Every time I read of someone pumped about their incredible "new" amp.... I just yawn and think, "wait until they try an early AC30, Trainwreck Rocket, '59 Twin, or JTM 45 (real ones, not clones) and then see what they say".

Anyway, I'm currently a little less blase' than my usual indifference to amp impressions.... and not because of one of the best amps I've heard ....BUT... for the *money*....maybe! It was only luck that I stumbled across and bought an Ampeg Reverberocket R-212R with 2 x 12" speakers and a pair of 6L6's. Used, $450 from a guitar shop... this amp has been out of production for years..maybe late 90's?...not sure. IMO the amp absolutely kills the Fender Blackface '65 Reissues of the Deluxe Reverb, Vibrolux Reverb, and Twin Reverb...all of which are decent amps but leave me cold when compared to the sweetness of the originals.. And.. the Reverberocket is still better than the also out of production brown '63 Vibroverb Reissue which was probably the best sounding "new" Fender in decades. It's much bigger and heavier than the original 60's Reverborockets with one 12", it is a PCB amp, but good Lord this amp sounds heavenly and expensive!!, superb reverb, great overdrive, and for under $500??, there is nothing even close.

:winnerHighly recommended for a VERY affordable amp with more of a blackface style voice and takes pedals as good as any amp ever. Anybody have one of these gems???:winner

Haven't had time to take a pic of mine but here is a stock photo of the amp. I know this is a place we usually expect more of hi-end gear but whenever I come across a piece that does get exceptional tone for fraction of the price I feel like I need to get the word out. Sometimes it just doesn't take $3K to get a special amp. Now if I can just find another Alamo Model 6....:

I saw me a bunch of Ampeg goodness at the show last weekend. I hope to try some of them. I played an SVT with my bass for years and always thought them to be more "high fidelity" than most amps. You needed to REALLY drive them to get breakup. No?
Last edited: Oct 23, 2015

renderit said:
I saw me a bunch of Ampeg goodness at the show last weekend. I hope to try some of them. I played an SVT with my bass for years and always thought them to be more "high fidelity" than most amps. You needed to REALLY drive them to get breakup. No?
Click to expand...

Yep, I actually tried to use an SVT one night back in the 70's ... Couldn't get anything resembling guitar tone from it. The Stone's used the V-9 guitar heads that looked just like SVT V-9 bass head but had effects and different preamp, the V-9 guitar cabs had 9x10" speakers instead of 8x10" in SVT cabs. I tried to buy an original mid 60's Reverberocket at the Texas shows two years in a row in '06 and '07 but couldn't find but one of the 6V6 versions that I prefer over the 7591a or 7868 models and it was re-grilled and dogged out. Always loved Ampegs,... had Reverberockets in the late 60's and 70's, V-2's, VT-22, VT-40 etc...all through 70's too. Never paid attention to their newer reissuesnd haven't seen them talked about.. I love this amp and I am hard to please with clean sounds. Does anyone here have a Reverberocket reissue?? I think they are more common with 1x12" than the 2x12" I have.
Last edited: Oct 23, 2015

Thanks for the review, Kerry.

What speakers does yours have in it?

CoyotesGator said:
Thanks for the review, Kerry.

What speakers does yours have in it?
Click to expand...

I tried one of these years ago and was impressed... but it had (IIRC) Celestion Modern Lead 70's and wasn't exactly doing the blackface thing with those in it. Punchy, snappy cleans and snarling breakup are what I remember. Those aren't tube rectified, are they?

Would love to give another R-212R a go sometime.
W

Made in Yellville, Arkansas, dist by St. Louis Music.

Every one was incredible ! But, they were SO frickin expensive, I don't think he sold even one !

He called and offered me the whole line, at cost, or he was sending them back.

I passed. Good thing, if these are that inexpensive NOW !

In truth, I remember your amp sounding like a Silverface Master Volume Twin, which at the time was about $ 250.00 !

EDIT; I just remembered the 2 12 combo having a TON of headroom. We fronted a Marshall Gov'nor in for some very convincing Plexi !
Last edited: Oct 23, 2015

Dammit, Kerry -- are you now talking me into buying yet another amp? :##

Mike and I talked about the Reverberocket a couple of years ago when I was on the hunt for a mid 60's. I too owned one back in the day and foolishly sold it for a new Fender London Reverb! :dang:dang As I remember it had this large third dimension sound, very thick, rich, and full for a 1x12 amp. Certainly could be compared to a BF DR, but the the echo was out of this world!! MHO Congrats on a cool find!!!:2cool:2cool

Back when I played them it was one that would really thump you in the middle of the chest (when turned up). That's why I loved it for bass. Our guitarist had one for a while but wanted more dirt. It would definitely be one I wouldn't play next to shelves loaded with expensive breakables. They move air and the soundwaves have edges.

CoyotesGator said:
Thanks for the review, Kerry.

What speakers does yours have in it?
Click to expand...

Sorry it took so long but the open back is not that open and way down at the bottom. The spakers are Weber 12F150T's . I kinda doubt these are factory.

Jimmy Johnson used a Reverb Rockett or some type of Ampeg on all those early Soul recordings. :yah

Great amps, a friend has a mint '60s ? B-15, it's the flip top Bass amp 15" speaker that was the go to amp back then for studio work. Stunning sounding amp.


I think Ken Fisher was employed early on by Ampeg's founder in design ?

A girlfriend of mine had the St. Louis marketed Ampeg 2-12 that she bought used from Guitar Center in '98 or '99 for $500. I was in-between bands at the time and wasn't overly impressed with the Ampeg in the apartment, but had a chance to open it up after one of her band practices. Wow! It sounded really good.

Let's just say I miss that amp a lot more than her.

j45 said:
I know this is a place we usually expect more of hi-end gear but whenever I come across a piece that does get exceptional tone for fraction of the price I feel like I need to get the word out. Sometimes it just doesn't take $3K to get a special amp. ....:
Click to expand...

Exactly! That's how I felt when plugging in some great small Fender Pro Junior amps a few years ago while I was looking for small and inexpensive great sounding amps for a small rig.
Thanks for sharing Kerry! :salude

Kerry, I've trusted you're opinion on many things amp related, I actually bought an Ultimate attenuator after you raved about how it worked with your VOX, but there is a good chance somebody dialed that amp you got (consider that they put the Webers in there), or you just got a good one, because I played more than a few of those Ampeg reissues from that series, and many of them developed rattles that were hard to diagnose and the dirty channels were terrible sounding. And I have a fondness for Ampeg amps. One of my favorite amps is my old vintage M20 Mercury with 2 6v6s, and I LOVE the hand wired Jet reissues http://www.musiciansfriend.com/amplifiers-effects/ampeg-j-20-jet-20w-1x12-tube-guitar-combo-amp which I feel were one of the best values out there. The buttery trem on those things are GREAT, and the alnico speaker in those sounded great cranked! But the series you're talking about left a lot of people cold. So if anyone out there is considering one of these, better plug it in first, or get a 48 inspection period.

Kerry, not a reissue but have you ever owned/played one of these? Incredible amps for the $$$! 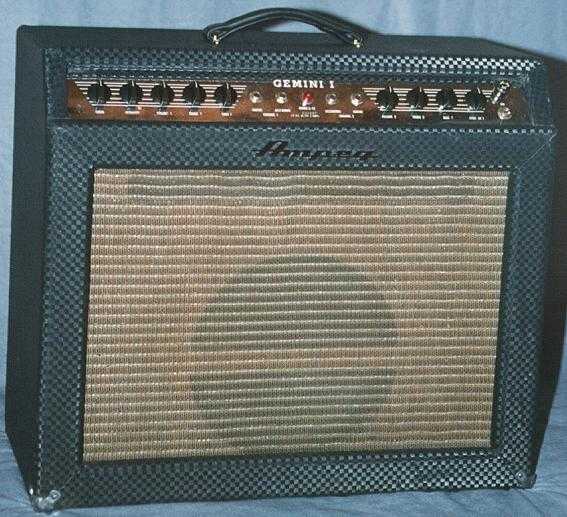 If that's the channel switcher, I had the 1X12 version years ago. Mine came with Svetlana EL-34's. I got it to use at church and mostly went straight into the drive channel. I think the circuit was designed by Obeid Khan. The EL34's gave it a nice growl with my Travis Bean and Guild Starfire and some nights I thought it sounded as good as anything out there, other times not so much--thin and brittle. That plus the fact I had to wind it up too loud to get to the sweet spot and reliabilty issues was a source of constant frustration and led me down several rabbit holes looking for n.o.s. tubes, attenuators and eventually lower watt vintage amps. One time I drove the front end of the overdrive channel with the output of one of those Crate Vintage Club 5 watt amps and that produced a cool Gary Moore live tone with truly infinite sustain EVERYWHERE on the neck at very low speaking volumes. I've never been able to replicate that with anything else and now I wonder if I should have spent more time trying it with overdrive and treble boost type pedals. I would also have liked to have heard how my LP Jr. would have sounded through it but the amp was stolen before I got the Jr.
Last edited: Nov 7, 2015

Heritage 80 said:
Kerry, not a reissue but have you ever owned/played one of these? Incredible amps for the $$$!