CDaughtry said:
Great stuff right there. That's why I love the LPF!:dude:
Click to expand...

Love this place, too. Have a 1959 345...not sure if it qualifies as a first rack, but its double whites absolutely scream!

Speaking of racks, u have any video of those puppies breaking' loose?

My boss from the old days used a word when describing that kind of action...mezmeratizing!!!

A cousin indeed. A very beautiful one at that!

Michael Minnis said:
A cousin indeed. A very beautiful one at that!
Click to expand...

Been thinking about mono conversion for mine and my 355...will never, ever play with two amps and Varitone adds a cocked wah wah tonality to the instrument when plugged in with a stereo to mono cable. Just haven't found anyone local in Tampa Bay that I trust to do it right. Know that Hogy at Komet is a go to guy for Varitonectomy but I don't get to Baton Rouge much and air travel blows with no instrument to schlep!!!

Brothers in your arms...! What a great story.

Congrats on the reunion. :jim

My addition to the 345 party. Mine also had the varitone disconnected

Congrats Michael. So cool you have the two. A29846 made a lasting impression on me from those times I played it at Marks. It'll be interesting to hear your thoughts on how they compare when the varitone is out.

Been thinking about mono conversion for mine and my 355...will never, ever play with two amps and Varitone adds a cocked wah wah tonality to the instrument when plugged in with a stereo to mono cable. Just haven't found anyone local in Tampa Bay that I trust to do it right. Know that Hogy at Komet is a go to guy for Varitonectomy but I don't get to Baton Rouge much and air travel blows with no instrument to schlep!!!
Click to expand...

This means you're might be doing it wrong. Try stereo to two monos, each mono into the same amp.

I'm all for modifying guitars, however, (trying not to beat a dead horse) some of my thoughts on the whole "Varitone-ectomy" are: why modify the guitar? It is FAR easier and cheaper to modify the amp. i.e., If you don't have a two channel Fender-style amp (think: black or silver face) then it is an easy mod to replace the single mono input on your amp with a proper stereo input. NOTE: You can't just swap the mono input with the stereo input, you have to add some little dohickys to the stereo input to make it work perfectly. I had my tech do it for me a long time ago to my Boogie MK3 and a tiny Fender, and I do not recall exactly what the dohickys are. Here's a picture of them, they're the pinkish pill shaped objects: 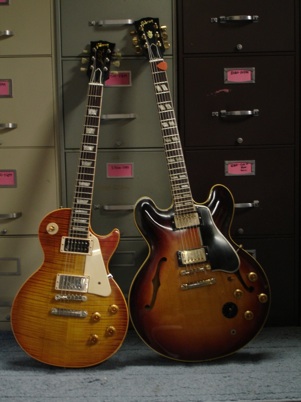 The modifications to the amps allow me to swap from 345 to LP with no fuss nor loss of tone whatsoever.
However, more power to those who do the Varitone-ectomy. I'm all about tone first.
Last edited: Nov 17, 2014
M

lpnv59 said:
Congrats Michael. So cool you have the two. A29846 made a lasting impression on me from those times I played it at Marks. It'll be interesting to hear your thoughts on how they compare when the varitone is out.
Click to expand...

Thanks, Billy. You're an excellent player with great taste and ears, so if A29846 made a lasting impression on you that says a lot. I'm looking forward to getting A29845 "fixed" so I can compare them side by side. Even now, A29845 is no slouch.

Great stories behind those two Michael........now I know where all the magic comes from......those and your fingers:2cool
P

renderit said:
Beautiful! How many were on the rack?
Click to expand...

It's really the batch size that matters. Batches weren't built according to racks, that's really just a slang term. They used racks to wheel guitars around the factory from station to station. The batch size was decided at the factory production meetings where they would figure out how much of each model to make.

The batch could include one guitar, or hundreds. So batch number S8539 might have included 100 ES-345's and 200 ES-335's, enough for many racks to roll them around. Sometimes there could be different models made as part of the same batch but they would often be from the same "family" of guitar style. Or sometimes the batch would be a single guitar, say an ES-355 with a custom fingerboard and black paint. Smaller batch sizes are typically seen with more expensive and custom instruments since they were obviously produced in more limited numbers.

Prototype, based on the many FON's I have seen, my understanding has always been that each one contained no more than 40 guitars. I've never seen a FON ink stamped in a Gibson that was higher than, for example, SXXXX-40.

Am I wrong? Anyone seen a higher FON?
P

The size of a batch might vary from only one (a custom order) or up into the hundreds.
Click to expand... 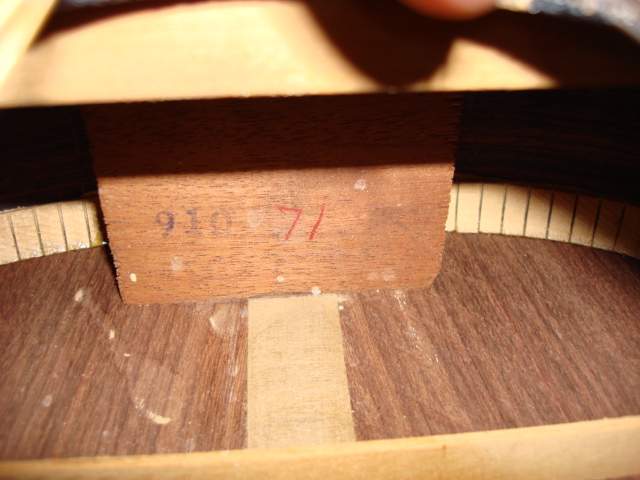 And plenty of further examples here:

Apologies for any lack of clarity in my question. I am referring specifically to the system used from 1952-61 when FONs all began with a Letter, and then four digits, and then 2 digits, e.g., S8537-14, one of the guitars in the initial post in this thread.

I haven't seen any of those where the two digit suffix is greater than 40. Where S is the year, 8537 is the batch and 14 is the individual instrument within the batch.

Letter codes, and the numbering system you describe, were not introduced in 1952. They had been used much earlier, in the same way.

I see the same company and the same practices at the same factory with the same corporate culture. The banner registry shows guitars through 1946, which takes us into the post-War period with batches larger than 40. The FON system is explained in detail in the Spann book, it's a real eye opener if you haven't checked it out - even the seeming randomness of the numbering is addressed. Every Gibson man should read it.

I know the late 1950 era gets a lot of attention for the humbucker guitars, but there were not any magical changes that happened because of the Les Paul model. You can imagine that guitars like Melody Makers and LG-1 were built by the hundreds, just as the A-Jr mandolins had been in the teens and the basic banjos in the twenties.

My guess is that with expensive guitars like the ES-3X5 series, not as many were ordered or produced compared to big sellers like the Les Paul Junior. So you are not likely to find large batch sizes. However, that does not mean that the batch size was limited by how many guitars can fit on one rolling rack - the same racks that had been in the factory for a loooong time. Every single thing Gibson made was assigned a factory order number, even though you can't always see it. Even the wooden toys they made in the 1930's. The FON was not intended to date an instrument, it was a method the factory used for accounting purposes to track expenses of labor and parts.

There are the racks in 1936. Clearly 40 acoustic guitars per rack in 4 rows of time, and subsequent FONs with more than than 40 instruments per batch.

Great story, beautiful guitars!
I think you just convinced me to hang on to mine which I recently put up on ebay.
These guitars are so resonant!
Serial # 32133.
Late '59 with double whites.
I also pulled the varitone.
Sounds sensational!