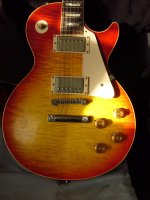 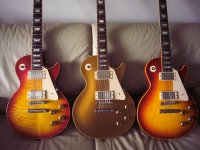 Nice ménage à trois you have going there!

Nice '06. Having owned an original '60 years ago and been around a few other original '58 - 60s, IMHO Washed Cherry is very close to the original cherry sunburst color.

I have an '06 R9 in the same Washed Cherry. Picked it up in early 2007 from MF's Private Reserve Guitars on a sweet "blem" deal. It was their photo guitar for their R9s and they decided it couldn't be sold as new. Unfortunately, it had some setup issues that had to be dealt with. Worst was the bridge post holes had been drilled at an angle, with the bridge tilted slightly towards the neck, making it impossible to set the intonation. Then we had to deal with the nut slots being too deep on treble side. I'm blessed to have a fantastic luthier in town who filled the bridge post holes with hard maple dowel and re-drilled them perfectly, and replaced the nut with a TUSQ blank. I later did the Mapleflame mod on the posts. Topped it off with one of the new "no-wire" ABR-1s. With it now being 16 years old it has mellowed and aged nicely, the tone has seeminbly woken up to the degree I occasionally go "WOW!"

Couple pics, first is the MF website photo, second is when it had first arrived. You have to look very close to see it is the same guitar. With inflation raging, it may be time to invest in Les Pauls! 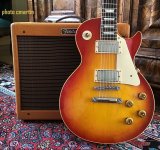