Some pictures of my Epiphone Les Paul

I bought this guitar for $100 at a consignment store on Lawrenceville Highway in Atlanta on New Years Eve 2020. It was for $600, but the owner of the consignment store (a Vietnam veteran named Joe) said I could have it for way less.
Carl Wilson Of The Beach Boys was a player of both Epiphone Casino 12 string and Epiphone Les Paul Electric Guitars. I think Nancy Wilson and Roger Fisher Of Heart both played various Gibson Les Paul, Epiphone Nighthawk and Epiphone Les Paul Electric Guitars (one of which was fitted with Alembic pickups!)
And my friend Katrina Todd also owns an Epiphone Les Paul (and just had the output jack and strings fixed!)
My Epiphone Les Paul is from the early 2000s, and has a scalloped neck. I also have an Epiphone J200 acoustic guitar, but that’s another story.... 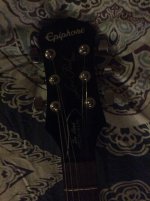 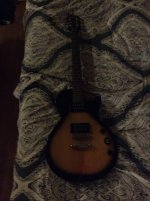 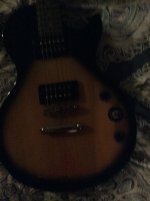 I hope you guys like the pictures of my Epiphone Les Paul!
D

You can see from the photo that you are poorly processed photos, but if you opened the image on the computer, analyzed it, and decided that processing is not required - then so be it. But this decision should be made only after viewing the result, not before. For example, I am astonished at people who say that their photos are underexposed and say that "it happened during the shooting." So? And what prevents you from pulling up a couple of sliders in any editor and show us a photo without grey faded tones? Like "artist's intent"? By the way, what do you think, if the picture was subjected to specific manipulations in any image editor, then it loses something or vice versa, it gains?
Last edited: Aug 12, 2021

DorothyNorth said:
You can see from the photo that you are poorly processed photos, but if you opened the image on the computer, analyzed it, and decided that processing is not required - then so be it.
Click to expand...