Now for something completely different - Rosewood and Butterscotch

Any Name You Wish

So the frets on my old '52 Tele RI were badly worn, and I never liked the way Fender shot a thick poly coating on the fretboard of the 2005 era guitars. Also being a 9.5" radius fretboard convert of late, and a preference for rosewood, and a new '60 neck from Fender, viola! 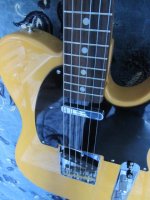 It now plays and sounds fantastic. The look is growing on me. Butterscotch and chocolate go together. 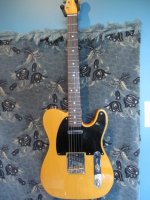 looks cool! i thought the reissue guitars were all lacquer, surprised to hear they used poly.

Any Name You Wish

At first Nitro Lacquer, then poly over whatever they put down first, then back to Nitro Lacquer today. Don't know exact dates of these changes, but mine is a 2005. I'll say one thing about a poly finish, it sure does hold up well. I wore the frets down badly on the original neck, and the fretboard was just starting to show some of that down-to-the-wood wear. The body is in great shape considering how much use the guitar has gotten over 17 years. The new neck is working out great, super happy with it. The rosewood warmed up the tone a bit I think, which is fine since it was ice-pick into the brain on clean/treble before. I still dial back the tone knob a bit, but not as much. Crazy cheap guitar for how it holds its own compared to my much more expensive Gibsons. I think I paid like $700 for it used.

I've had mixed results with poly holding up. I have a PRS that is all smashed up and cracking on the side and I have an early 1970s Telecaster that looks as checked as any nitro one (mocha original finish).

I like the finish Rickenbacker uses. It's some sort of light-cured deal but it really is thin and holds up well!