Hello guys,
long time since my last post. I've recently purchased a CA Jimmy page #1 Yamano select. I know the wiring thing (Ed Wilson in 2003, who inspected the instrument at Page's house, stated it was wired that way) but I'm totally pissed off because I don't like the constant OOP sound in mid position. Mid position switch was a sound I like a lot and Page used even more, expecially during rhytmic parts. So I want to wire it in the standard way and using the existing push pull to occasionally reversing the phase.
I was wondering if there is a wiring schematic to follow. This kind of operation will be done by a tech but I'd like to have the scheme with me in the future.
I will never sell this guitar so I don't care about those collectors b*****it things
Thank you in advantage for who will reply!
(in the center, the guitar in exam) 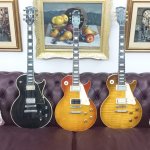 IIRC it is wired (incorrectly) as OOP in the mid position. The push/pull is to coil cut the bridge pickup. It is not clear what you are asking.

Yes ..To wire it like Page in that Video, you need to Rewire the push pull to a phase Reversal ( not a coil split) and put the the mid toggle switch back to standard.. Take it to a Luthier.. Edwin Wilson didn't listen to a word Jimmy said in that Video and consequently the reissues are all wrong...Gibson have a coil split on their push pull on the reissue .( morons) The Page "Middle Position" is supposed to be IN PHASE Parallel ( normal). This was Jimmys main sound .Gibson reissues have it oop.
Further, The Page Custom shop guitars sound nothing like Jimmy's #1 during the Zeppelin years.The Electrics were all different on Jimmy's Guitar come 2003 compared to the Zeppelin years , so even if Gibson had watched the video back , and copied Jimmy's electrics ,while it would have been closer, it was nothing like Page's # 1 Les Paul 1969 to April 72 or April 72 to 1980 (Bridge PUP Change)