I'm surprised I haven't seen any other posts on this guitar.

I wanted a P90 guitar, and I'm a sucker for all things BLUE. The clincher was hearing that the proceeds (as vague a term as that is) were going to music education.

I love mine. Build quality/attention to detail is A+++. In fact, probably the best of any Gibson I've owned. It's ridiculously resonant and very light. About the only thing that bothers me is the P90 hum, but that's a conceptual flaw rather than an execution error. 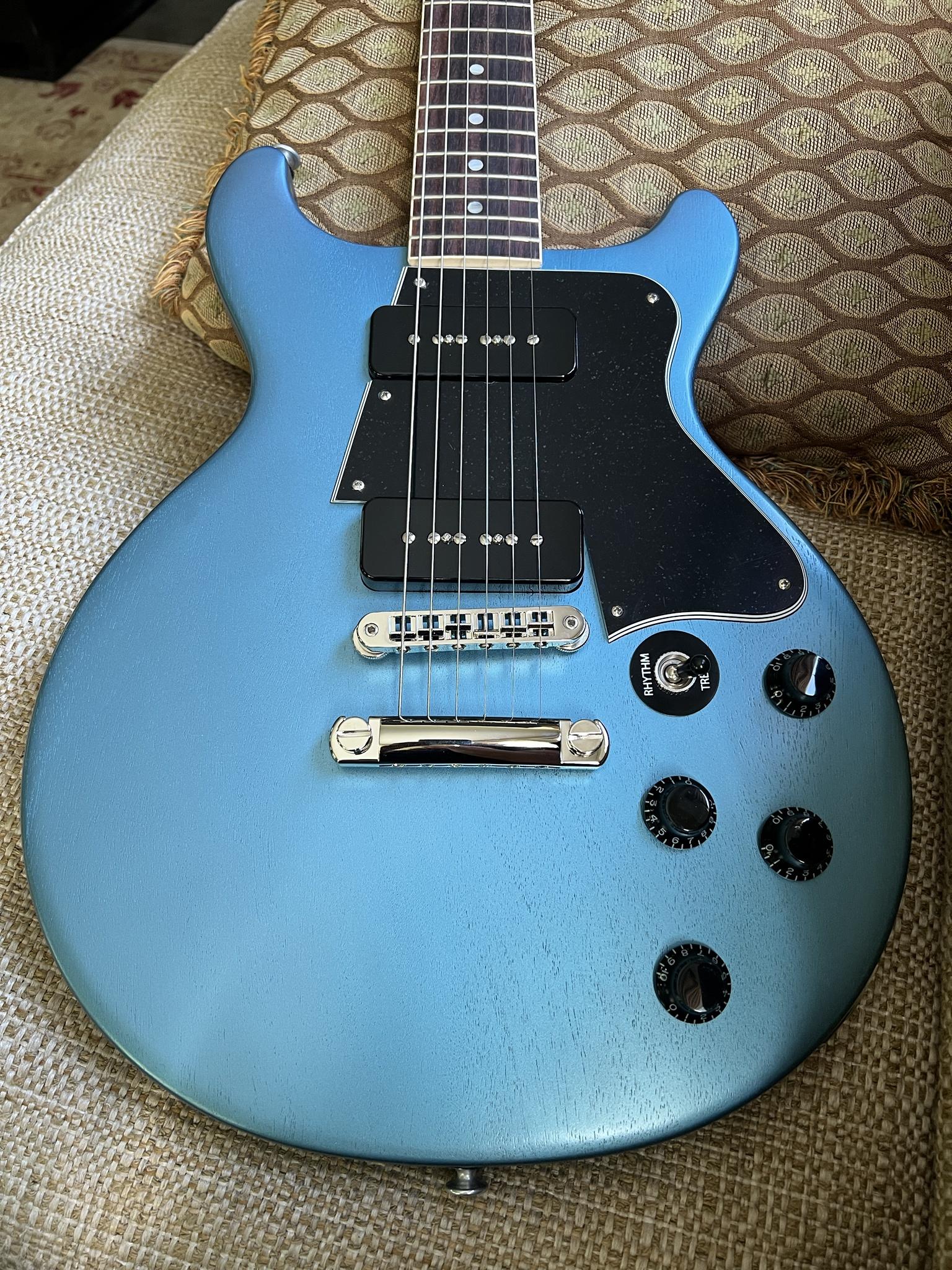 P90 hum is the flavoring between songs reminding you of the goodness to come.

It is also the reminder that volume pots have a reason for being.

renderit said:
P90 hum is the flavoring between songs reminding you of the goodness to come.

It is also the reminder that volume pots have a reason for being.
Click to expand...

There are some venues I play that I wouldn't even consider bringing it because of how bad the hum can be from electrical interference. In fact, we don't do any songs at those places that use fuzz pedals because even with humbuckers, it's too loud.

And they call themselves "musical venues"!

Nice.
I’ve been aware of these and really like the look.
If you get bored playing it and decide to start a “blue guitars” thread, I have several pix to contribute.

I think they look really nice! I also think Beato's decision to give his share of the profit to musical education, is honorable. 👏

I think it looks great. I think I would guiltlessly have a Floyd Rose Whammy bar added, maybe the rolling nut.

I wish I had the funds available when they came out, have we heard if the run is done?

Id like to pick one up still but wont pay scalper prices..

Angeldeville said:
I wish I had the funds available when they came out, have we heard if the run is done?

I believe it was a limited run, and they seemed to sell quite quickly. But I'm not 100% sure.

EDIT: I just looked on reverb and saw 4 people selling them at stupid prices. I'm inclined to put mine up for sale on reverb just to undercut the scalpers.

sws1 said:
I believe it was a limited run, and they seemed to sell quite quickly. But I'm not 100% sure.

EDIT: I just looked on reverb and saw 4 people selling them at stupid prices. I'm inclined to put mine up for sale on reverb just to undercut the scalpers.
Click to expand...

That’s a shame, a dc has been missing from the gibstone catalogue and missing from my collection. I may just end up with a Tokai or Greco. Not paying stoopid prices for one, to include custom shop.

No lefty yet, so I don't have a dog in the fight, but I watch with keen interest.

FWIW, beyond a couple of 'pusher' websites stating it's a limited run, then going on to mention worldwide availability of 500... I have yet to see an official Gibson statement to the effect these are categorized as 'Limited' in their terms.

I haven't seen a special COA or other usual indication Gibson uses when producing something truly. Can anyone provide?

My speculation: there were 500 in the initial year's production run, then Gibson takes a strategic pause to evaluate sales and gauge market interest, then make a determination on successive runs based on whatever factors make sense to them (not us). My guess is Gibson will handle this like other Artist runs, so long as they can predict a mutually beneficial succession or runs, they mete out more yearly until they reach a perceive cap, so as to not have any accumulated stock which requires blowouts. It's just going to take time given the production backlog. I am guessing they underestimated Rick's model's sales potential and the reach of his YT influence.

It is notable they like the halo of the charity. Are they watching the flippers, did they restrict so as to not glut the market but not they will deflate it with subsequent runs? 'As The Gibson Turns.'

Of note -- there are no other USA DC Specials in current production -- only CS variants. That's got to be intentional. I am sure they are evaluating Rick's, along with single cut sales, to see where they are going given hey have a constrained build pipeline to manage. Let's hope they go forward and don't see the popularity as an opportunity to gouge.

So lots to consider, we'll see what unfolds.


If you really can't wait, then go crazy with mods on a used 2015 DC Special.

I was searching for other Gibson Beato users and found this thread. Where are the Beato owners? Seems like out of 500 distributed there'd be a few more threads like this one.

I just got mine a few weeks ago. I love it. Yes, I had to do a bunch of setup. It was manufactured in Feburary, then sat in the case until I got it. Had a little bit of fret sprout, which I'd heard on some YouTube reviews. I applied a couple of coats of F-ONE Fretboard Oil Cleaner and overnight the sprouts practically disappeared. That was really no surprise to me as wood shrinks as it dries up, and it's probably a good idea to let it dry for awhile before oiling it.

The neck relief was spot on. I had to lower the action. I think it was over 2.x. I'm now at 1.75/1.5 with zero buzzing on any frets. The intonation was completely off, but now it's perfect. Oh, and the pickup heights were not set properly. They are now.

It plays beautifully. I haven't found any of the Gibson QC issues that others on YouTube mention. The Made In The USA stamp on the back of the headstock is nice and deep. All of the paint was perfectly applied. About the only grip I could have is the pot caps are different heights above the body. My OCD will lead me to open the electronics bay and adjust the pot nuts to make them all the same height. Other than that, it's a great guitar.

And I really, really love the way they placed the grain. I haven't seen any other ones with the grain converging like it is on mine. Every other one I've seen has parallel grain. It's a keeper. 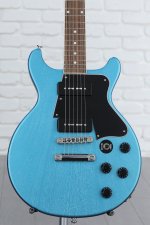