do you remember the first real burst you saw in person? first burst you've played?

yesterday was finally the day for me. Prior to this i've played another forum members mid 50s to 57 goldtop conversion. i think that had real PAFs and it was pretty awesome. I wish i knew what his forum name was but either way that beat to hell LP is still top 3 guitars i've ever played.


well im in london on business and had half of sunday off so i went down to denmark street. this is in a display cabinet in one of the shops down there.

funny thing is, there was a R8 hanging not far from it. Couldn't afford that one either.

Buy anyways, this is the first burst i can recall seeing in person. Can't wait for the first time i get to play one.

anyone know the serial or any history on this one?

which ones were your firsts?

I have seen a couple but never played one. When I worked at GC in 2001 a 60 came through the door. It had a broken headstock. I didn't know the value at the time, all I knew is the boss lost his mind when he couldn't close a deal for it. I think they offered 30k and any guitar in the store.

I got to see George Martin's "Hank the Plank" last year at a guitar show, just sitting in it's case on the floor.

I am headed to Nashville soon and hope to see a few more, and hopefully play one!
M

I'm sure thru the years I've heard and seen several in concerts I've attended...of course JBLP, Knopfler, Heart, and many others. The only one I've seen up close is the Bachman Burst in it's glass case in Calgary...I started a thread on that here a while back. BTW speaking of Bachman and burst players I saw Bachman open up for Skynrd this past Sat. Due to a bad back he's playing new, weight relieved Gibsons. He's playing great and his tone is fantastic. Skynrd were tremendous...Rossington was great, Les Paul all night cept for the SG on Free BIrd....legendary for sure as is Bachman. I highly recommend the Les Paul infected catch this show. You just have to pretend Randy's playing his "American Woman" burst and Gary's playing Berniece.

Top shelf on display cabinet in music store. I was 5-6 years old at the time. That was in 1959.
What still resides in my memory was the bright red of the sunburst and the small body size.
:dude:

Aside from 'bursts that I likely saw in concert over the years, the first 'burst I got to see up close and play was Ed King's Redeye. That was in '07 at his house in Nashville. Here's a thread I put together shortly thereafter, documenting the experience: https://www.lespaulforum.com/forum/showthread.php?132199-The-Ed-King-Burst&highlight=king

It was the early '90s and at Lark Street in Albany, NY. I was still a student at Syracuse University.

I did a double take when I saw it hanging on the wall. I asked Buzzy "Is that what I think it is?"
He replied "It is."
"May I play it?"
Buzzy looked me up and down, paused and said "If you drop it, you owe me forty-thousand dollars." Then with one hand gripping the 'butt' of the guitar, he handed it to me over the counter.
I plugged it into a '59 Bassman and quickly decided that it was the best sounding and easiest to play electric guitar I'd ever experienced. It was a 1958 'Burst with small frets and no serial number. According to Buzzy it came from the factory without a serial number. The color was largely there and the flame was light, tight and evenly distributed over the top. It was not a flame monster, nor would it even be described as overtly flamey. I definitely wasn't a plain top nor even 'peek-a-boo'. It was in very good condition but needed a re-fret. I can't remember if the tuners were original or not but if I had to guess, I'd say they were.
I returned the guitar to Buzzy and thanked him for the enlightenment. He grinned.

I was a semi-regular (and harmless) tire kicker at Lark Street. Buzzy knew that I was a vintage guitar nerd and that I genuinely appreciated his instruments. I still appreciate his generosity in allowing me to play pretty much whatever I wanted although I never purchased anything. It was extremely educational.

I would love to see more of that "UnBurst". I've only seen three photos: BOTB, Billy's Gearhead book, and couple snapshots from about 1972. 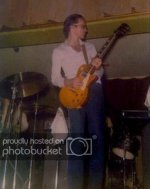 wsaraceni said:
which ones were your firsts?
Click to expand...

So long ago, I couldn't tell the first one's I saw in person at the Dallas show in 1983. I've seen probably close to 100 of them in Texas in the last 35 years. Couldn't tell you the first I played either. Long time.

The first one I actually held would be this '59: 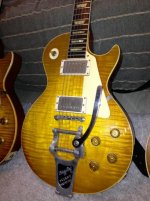 Jimmy Page at a Led Zeppelin concert in Baltimore, MD, June 1972, was probably the first vintage 1959 Les Paul I ever saw in person. But I had seen vintage Gold tops and refinished Les Pauls in stores and at small concert venues going back to 1970. Later that summer in 1972 I saw Ronnie Montrose playing his 1959 Les Paul with the Edgar Winter Group at Hayfield High School in the cafeteria. They played on this tiny folding stage that all the schools had back then.

Back in the early 1970s, all the national, regional, and local bands had guys playing vintage Les Pauls. They were very common.:salude
V

Around 1980 Gil had 9 0826 (it had a Bigsby which I wanted) for sale for the going price of $3,000. I went over to look at it, had the money in the bank, but had to pass as I had tuition coming up. Oh well, I got some photos of it. Just curious, who owns it now? You're welcome for me not snagging it back then.

I haven't even been in the same room as one. Not even the same postcode. I need Bonamassa to have a look at my shift pattern when he's planning his tours then maybe I might see one.

VamboRool said:
Around 1980 Gil had 9 0826 (it had a Bigsby which I wanted) for sale for the going price of $3,000. I went over to look at it, had the money in the bank, but had to pass as I had tuition coming up. Oh well, I got some photos of it. Just curious, who owns it now? You're welcome for me not snagging it back then.
Click to expand...

First one I saw and played was JB’s Johnny B at Rumbleseat about ten years ago. They were gracious to the point of cavalier about letting me handle it. 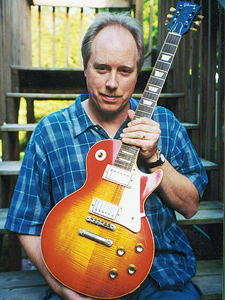 Somewhere around 2002 I acquired a dingy banged up vintage Les Paul, 9 0636, it had a fantastic neck pickup, loved it until.... I played a refined 57 or so ex Dan Toler Les paul, sounded like two guitars in one, amazing, made mine sound kind of dull in comparison, broke my heart. Ended up selling mine. I do regret it now.
You must log in or register to reply here.
Share:
Facebook Twitter Reddit Pinterest Tumblr WhatsApp Email Share Link
Top